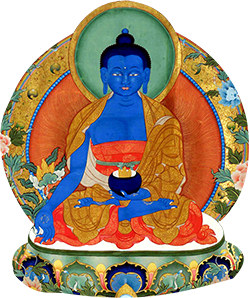 Relationship between Tibetan Medicine and Astro-Science

How Tibetan Medicine and Astro-Science are Related
Tibet is a country with a rich history dating back thousands of years and over the centuries the Tibetans have developed a sophisticated variety of skills in the fields of arts and academics indigenously. Over different periods, this has been influenced by neighbouring countries including India, China, Nepal and Mongolia. Due to this inclusiveness, the Tibetans now have a very rich living tradition and culture which can be considered to be ‘The Ten Fields of Knowledge’. One unique feature of all the studies involved is that they can be condensed into one interlinked and cohesive whole and they all derive from the same essence — the ethics of Tibetan Buddhism. Whether imbibing knowledge from grammar, healing, logic, arts and crafts, philosophy, poetry, synonyms, metrical science, astrology or theatrical performance, the guiding principles all lead to spiritual and temporal wellbeing.

Unlike most medical systems, especially the modern-day and dominant allopathic school, traditional Tibetan Medicine is not only related to traditional Tibetan Astro-Science, but both these ancient systems are based on the same basic fundamentals of the five elements —Earth, Water, Fire, Air and Space. The following section tells more about this symbiotic relationship, the historical background and a few practical or applied uses of Tibetan Astro-Science within the practice of Tibetan Medicine.

The Fundamental Relationship to the Five Elements
According to the Kālacakra Tantra, the primary Tibetan Medical Tantra (rGyud-bZhi) and various other Tibetan Buddhist Tantras, the whole of the universe, including sentient beings, is made up of the five basic elements beginning as Space, Air, Fire, Water and Earth respectively and finally dissolving reversely in the same elemental form. And also the proportion of the elements in which the universe was formed has a striking resemblance to the proportions of the human body and the three humours. The elements manifest ‘Externally’ as Air (Wood), Water, Space (Iron), Earth and Fire. ‘Internally’, the elements manifest as vessels and ligaments, blood and pus, bones, muscle tissues and heat respectively. And ‘Secretly’, the elements manifest as liver, kidneys, lungs, spleen and heart.

The elements are to be understood according to their functional properties rather than literally. The Earth element provides solidity, the Water element imparts moisture, the Fire element bestows heat, the Air element powers mobility and the Space element offers room for development.  Since it is the wish of every sentient being to be happy, it becomes very important to know what we are actually made up of in the first place, and then what causes a person to be unhealthy.

We are nothing but the union of our ‘body’ and ‘consciousness’. The body is composed of the five elements (said to be flawless seeds from father and mother), sustained by those five elements (the Six Tastes listed under Diet, below) and afflicted by the same elements when they are either in an augmented, exhausted or agitated state. Another factor, which, according to the Buddhist view is more influential than the physical body, is the mental faculty which when in a disturbed state causes us to feel unhappy.

In a nutshell, Tibetan Medicine provides various preventive remedies in forms of diet and behaviour, and curative remedies in the forms of medicine and external therapy, in order to treat and pacify the disturbed state of the elements. On the other hand, Tibetan Astro-Science analyses the elements according to their mother-son-enemy-friend and self relationships, and indicates remedies in the form of personalized pujas and mantras, protective amulets, rituals and counseling. These remedies are calculated to pacify any negative energy. This is, however, due to a distorted conceptuality in the ultimate sense.

Practical or Applied Use
The elements in their different combinations give birth to the three humours, Rlung (Air), mKhris-Pa (Fire), and Bad-Kan (Earth and Water), which when in a disturbed state of excess, deficit or agitation cause disease. Tibetan Medicine’s approach towards a healthy way of life includes the four Therapeutic Methods of Diet, Lifestyle, Medicine and External Therapy. And when a physician approaches a patient, the three Diagnostic Methods of Visual Examination, Palpation and Interrogation are taken into consideration in order to analyze the illness.
The following sections will show how Tibetan Astro-Science is used in complementing and implementing the above-mentioned methods, and its various other roles.

Diet
This is perhaps the most important aspect of healthy living: ‘We Are What We Eat’. As stated earlier, in the Tibetan tradition our body is composed of five elements and sustained and nurtured also by those same elements. A diet is divided into Six Tastes which are individually constituted by combinations of the four elements — Earth, Water, Fire and Air — while the space element is all-pervasive. All edibles can be categorized into the Six Tastes according to their elemental properties. Thus a physician guides a patient according to the needs of his or her body.

The following table portrays the elemental combinations of the Six Tastes and how they function in our body in terms of either aggravating or pacifying the three humours.

Lifestyle
In order to stay fit, it is very important to lead a healthy lifestyle. A good lifestyle has to be guided by proper behavioural patterns on both a daily and incidental basis, and also according to seasonal changes. The final verdict on this is guided by consulting the almanac, which is prepared annually according to stringent astrological calculations. The timing of the day and the seasons determine our behavioural pattern in terms of diet, clothing, work, and other exertions.

Medicine
When a person ignores the preventive measures of a healthy diet and a hassle-free lifestyle, they are usually forced to consult a physician for treatment in the form of medicine and external therapy. Tibetan medicines can be prepared from a variety of naturally-occurring ingredients and herbs are a major source. One has to know the right location and timing to pick the herbs in order for them to have the maximum potency. Appropriate timing is also necessary while compounding a medicine, blessing the medicine and finally while consuming it. A perfect guideline to these timings is gained only by referring to the astrological almanac prepared by astro science practitioner. For instance, the medicine called Chongshi (Calcite) Dawoe is prepared under the light of the Full Moon of the eighth Tibetan month. Blessing the finished medicines (sMan-sGrub) involves elaborate rituals and prayers on specially calculated dates.

External Therapy
Sometimes it becomes necessary to prescribe additional therapies like bloodletting, golden-needle, and moxibustion. Once again, the physician not only has to know precisely when to perform the therapy, but also on which exact location of the patient’s body. Here it becomes very important to understand the concept of Bla. It is that element which supports our vitality or life itself. It is a form of energy located predominantly at the heart and yet it circulates around the body in a 30-day lunar cycle. While performing such external therapies, one has to avoid treating the point on the body where the Bla resides on that particular day. Moreover, there are certain dates which are not suitable for performing such therapies, and the patient’s astrological Adversarial Days are also taken into consideration. Therefore, choosing the perfect day, date and hour for the therapy to be performed becomes really important for the physician. This is possible only if the physician has an understanding of the interpretation of astrological calculations elaborated in the almanac.

Diagnosis
In the course of diagnosing a patient, the physician must be well-acquainted with the guidance shown in the almanac, especially during pulse diagnosis which is one of the specialties of Tibetan Medicine. The physician has to have the knowledge of external changes, and their influence on the body within a day and also over a year; otherwise one cannot achieve a proper reading. There are differences in the pulse-readings of a patient over the duration of a day and according to the seasons of a year. The five elements have their specific manifestations of predominance in certain seasons; for example, during spring the Wood element is predominant for 72 days and has its effect on the liver and gall bladder. This is followed by the Earth element for 18 days which has an effect on the spleen and stomach, and so on. There are excerpts in rGyud-bZhi — the seminal text of Tibetan Medicine — about the Seven Wonder Pulses. Astrological know-how is essential for the diagnosis of these.